Skip to content
Giuseppe Verdi, the great Italian lyric composer who, with his opera Nabucco, united his nation against the Austrian oppressor

Giuseppe Verdi, one of the greatest musicians in history and a symbol of Italian unity, was on the verge of abandoning music when he composed Nabucco, the opera that consecrated him as an artist and made him a symbol of freedom

During the Napoleonic campaigns, the village of Le Roncole belonged to France after having been annexed to this nation. Verdi, born in 1813, is registered in the civil status as a French citizen under the name of Joseph Fortunin François. Years later and thanks to his innate talent, the doors of higher education were opened to him, which his father, a humble innkeeper, could not afford. 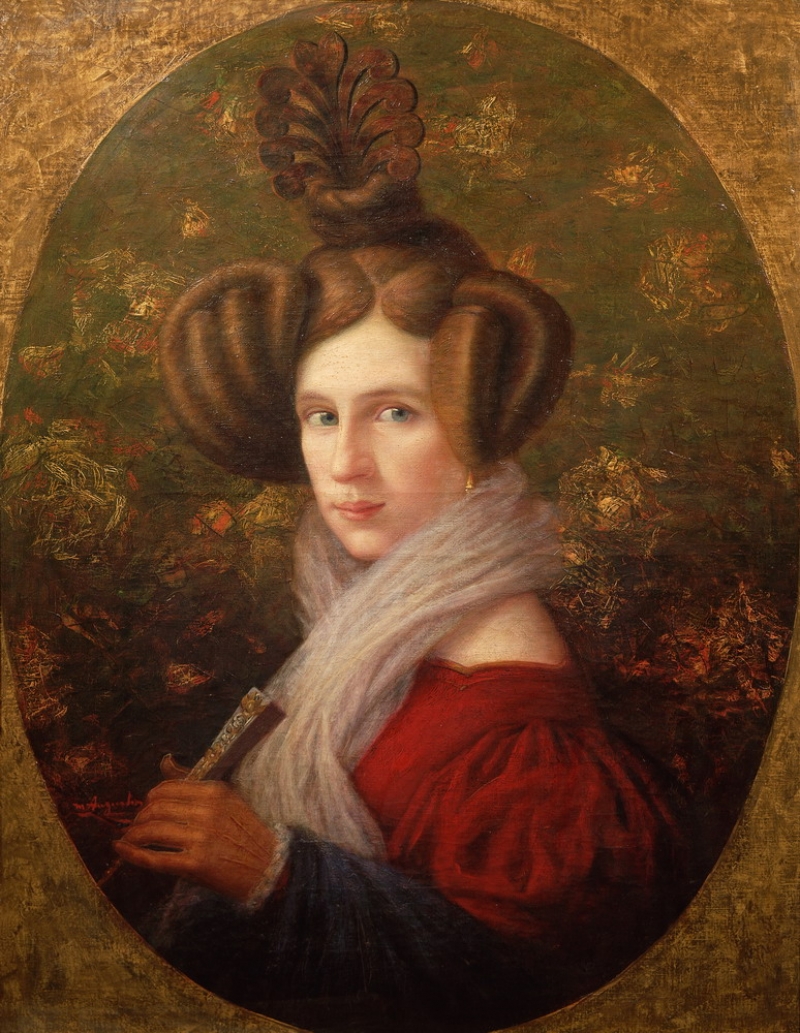 Margherita Barezzi, first wife of Verdi. After the widow and the death of his two sons, the composer creates Nabucco

Finished his studies and already with a booming career, Around 1840, a series of events brought Verdi to a critical moment with the death of his wife and two children. At that time, Verdi was writing his second opera “Un giorno di regno” which was premiered a few months after the events and it was a resounding failure and he did not know how to continue his existence.

Success was accompanied by luck when the entrepreneur Bartolomeo Merelli gave him the script for a biblical drama written by Themistocle Solera, about a text Anicete Bourgeois Yes Francois Cornue. Was the story of Nebuchadnezzar’s conquest of Israel and its violent tyranny.

Va pensiero, the chorus of Nabucco, the opera by Giuseppe Verdi which is a symbol of freedom

Verdi said that when he received the libretto, he arrived home “and with an almost violent gesture I threw the manuscript on the table… the book opened” and it was then that he read the sentence that, some time later, all of Italy would sing as a hymn, “Va, pensiero, sull’ali dorate” (“Fly thought with golden wings”). That night he read the script not once but three times; I could almost recite it from memory.

Nabucco was the story of the madness of tyrants who restrict the freedoms of individuals. The analogy with Italy under Austrian domination was obvious and, in one way or another, permeated the creation of the artist, taking care not to go too far in its independence message as Austrian rule lurked with fierce censorship.

However, the subtlety of the message in a biblical account was accepted by the censorship body of the Austrians and Nabucco created on March 9, 1842 in Milan. One can imagine the nerves of the artist after two years of intense work, the details, the repetitions, the corrections, etc. A lot was at stake tonight. 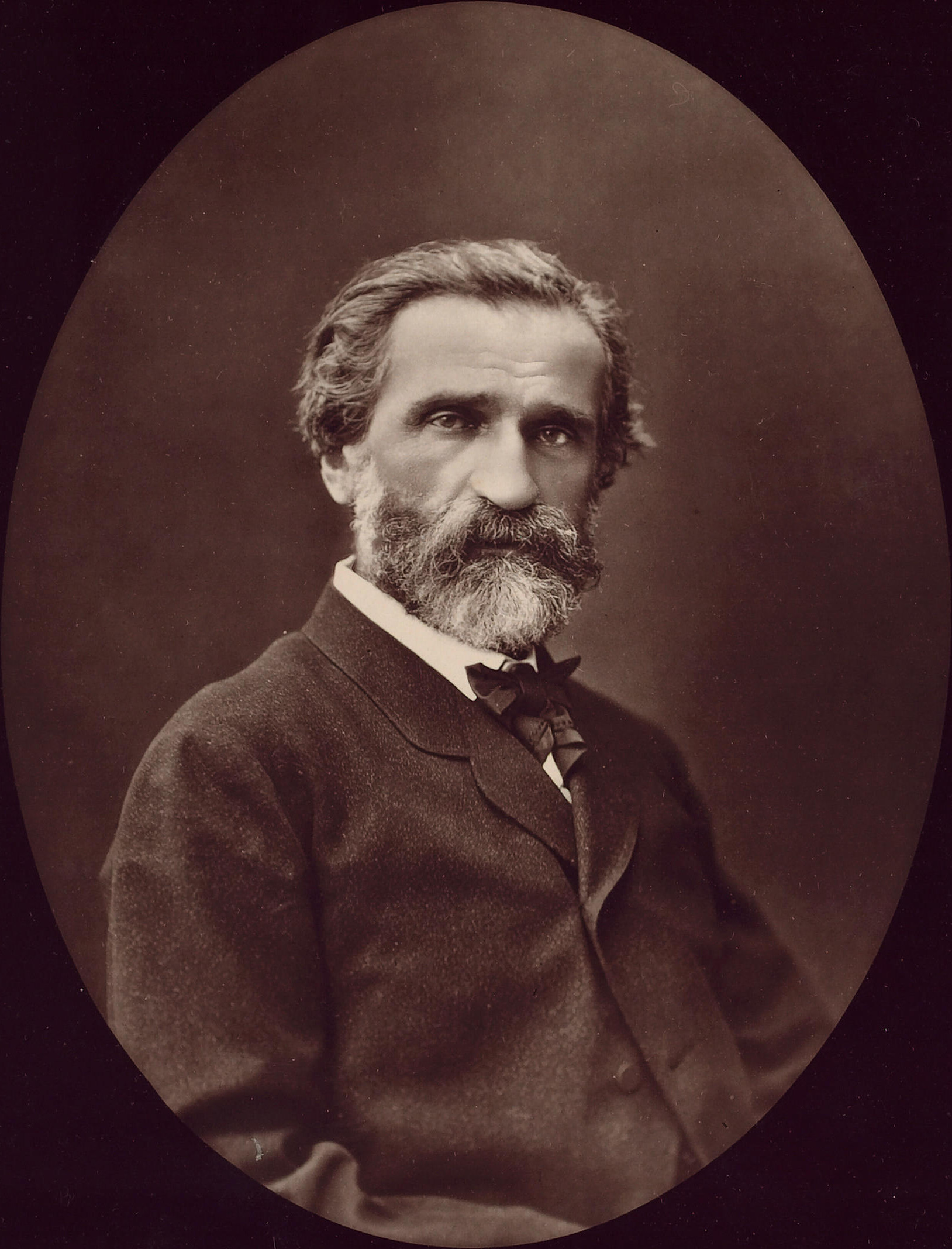 Verdi, in his maturity. After Nabucco, he became the great Italian popular idol

The premiere took place at La Scala in Milan and the role of the wicked Abigaille was interpreted by the most famous soprano of her time, Guiseppina Strepponi who, over the years, will be the wife of Verdi.

La Scala vibrated in a tense silence with the development of the work, especially while the chorus of Jewish slaves sang the “Va pensiero” in the third act. The curtain finally fell and the audience erupted in applause. Nabucco was the opera everyone was waiting for, the song that ignited patriotic fervor. The people of Israel were Italy, that “beautiful lost homeland”. “Viva Verdi” germinated on the walls of Milan, a cry of secret freedomthe dream of the “risorgimiento”, the desire for the reunification of the homeland hidden behind the acronym Verdi as Vittorio Emanuelle Re d’Italia (Victor Emmanuel King of Italy). 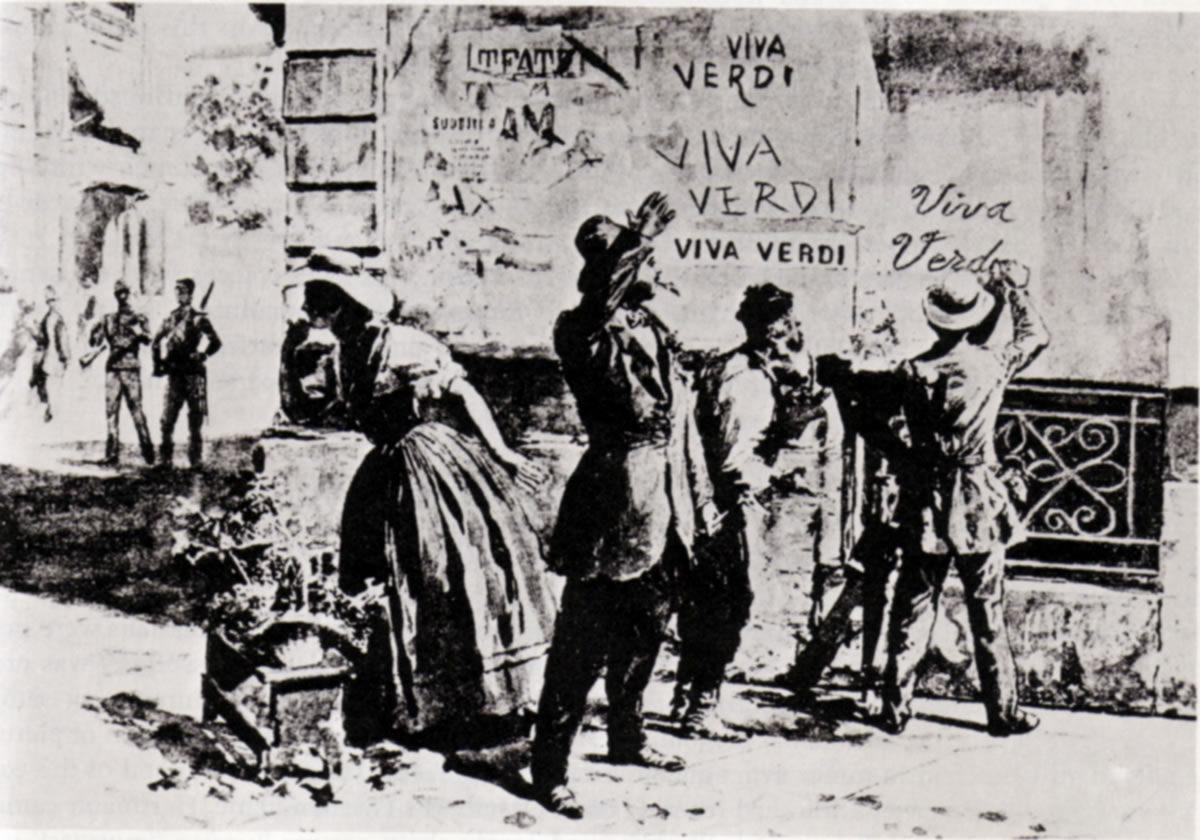 With Italy occupied by the Austrians, the people took Nabucco’s choir, called Va pensiero, as the banner of freedom. On the walls was written “Viva Verdi”, whose last name is an acronym of Vittorio Emanuelle Re di Italia (Victor Emanuel King of Italy)

The Austrians did not know how to react to this popular effervescence, this consecration of a hitherto unknown musician who, from now on, will be on everyone’s lips. For 65 nights, the theater erupted in applause when the golden wings of freedom lifted.

After Nabucco, nothing was the same for Verdi. He was a popular idol but the Austrians reviewed his works, watched him closely. In 1843 the play he was working on, “I Lombrdi alla croaciata prima” was censored. Cardinal Gaetano Gaisruck demanded that parts of the work be changed, which Verdi strongly opposed. “It will happen like that or it won’t happen,” said the composer, sure that his prestige would guarantee his position. The cardinal accepted the imposition and the work was executed in its original form. 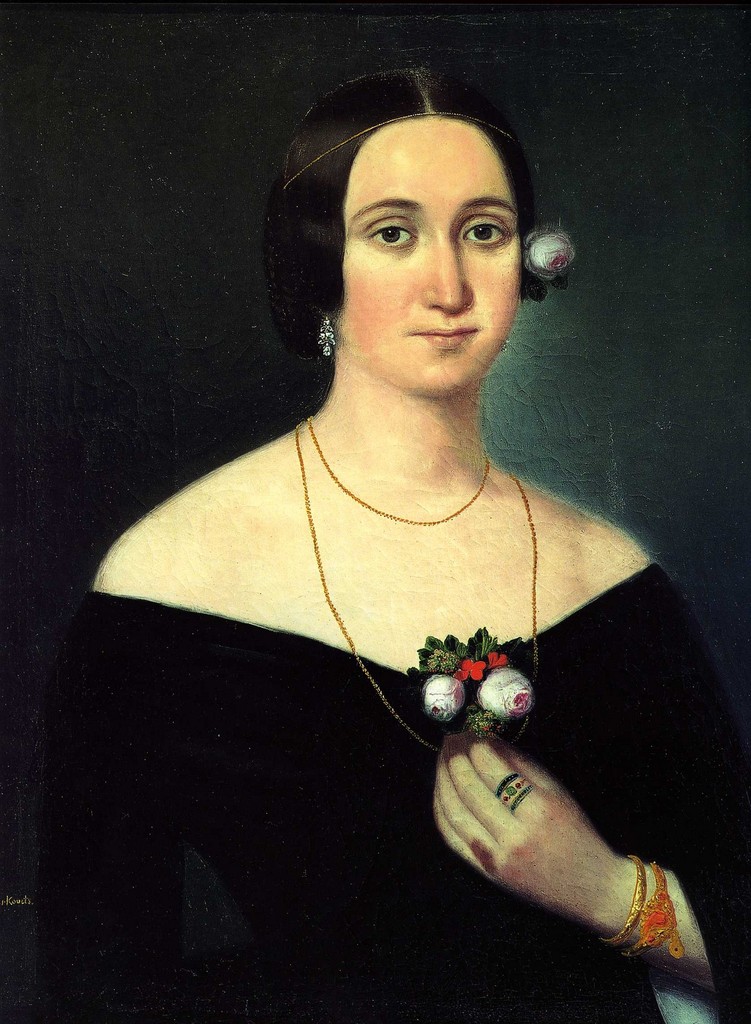 that’s how a movement formed around him, representing the ideals of unity in popular movements. He distinguished himself in works that drew on his political philosophy such as Simón Boccanegra or Don Carlo, but they also arise to defend his beloved Guiseppina from the hypocritical gossip that criticized the soprano, accused of having led an airy life in her youth and that with the teacher they spent years living together without getting married (they will do so years later in secret). Their, Verdi challenges these hypocritical bourgeois with La traviata (La Perdue), the story of a courtesan –Violetta Valery– who turns out to be a true heroine, more dignified and loyal than the members of the modest society around her. Verdi raised a musical monument to his companion as he once did for the freedom of Italy.

His political fight was recognized by the same man whose name he hid: Victor Emanuele, when he became monarch in 1874, granted him the title of senator for life. It was the recognition of his fight, of his patriotic perseverance. But the composer, disappointed by politics, takes refuge in his city, in his native town. In this house, now turned into a museum, are still hoarded the train tickets for the Senate of Rome, which the composer was never able to use, because his world of arpeggios and chords was purer and more harmonious than that of obscure political relations. 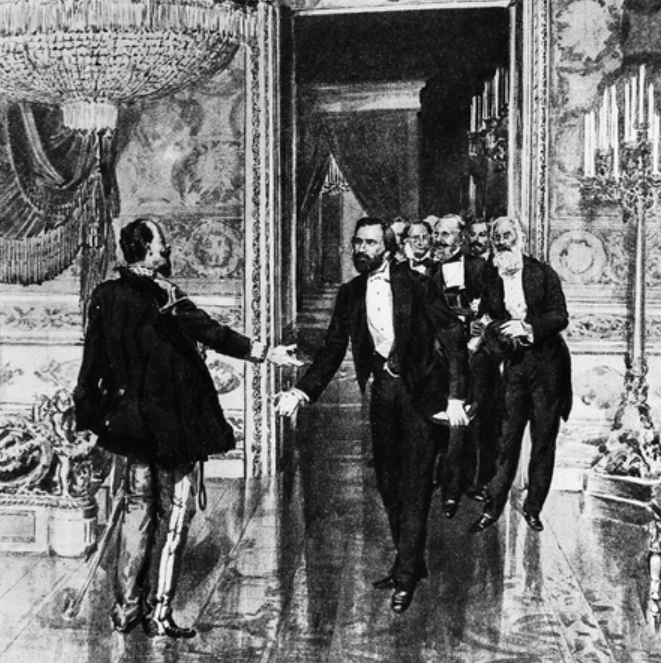 King Vittorio Emanuelle receives Verdi after being proclaimed. The musician was named senator for life, but never traveled to Rome to receive the honor, disenchanted with politics

When he died in 1901, people spontaneously gathered in front of his villa to sing the “Va, pensiero”turned into unofficial anthem of Italyand in the last farewell to a great.

The history of the choir of subjugated peoples does not end there, because on the occasion of the 150th anniversary of its creation, the director Ricardo Mutti, after having directed the “Va, pensiero” and before the request for recall of the public, among which was the Prime Minister Silvio Berlusconi tell those present “Today I am ashamed of what is happening in my country… This is how we are going to kill the culture on which our history was built” and looking at the presidential box, he said: “I have been silent for many years. Now we have to make sense of this chant”… and then invites the public to sing together this “Va, pensiero”freedom on the golden wings of the homeland “si bella e perdta”. 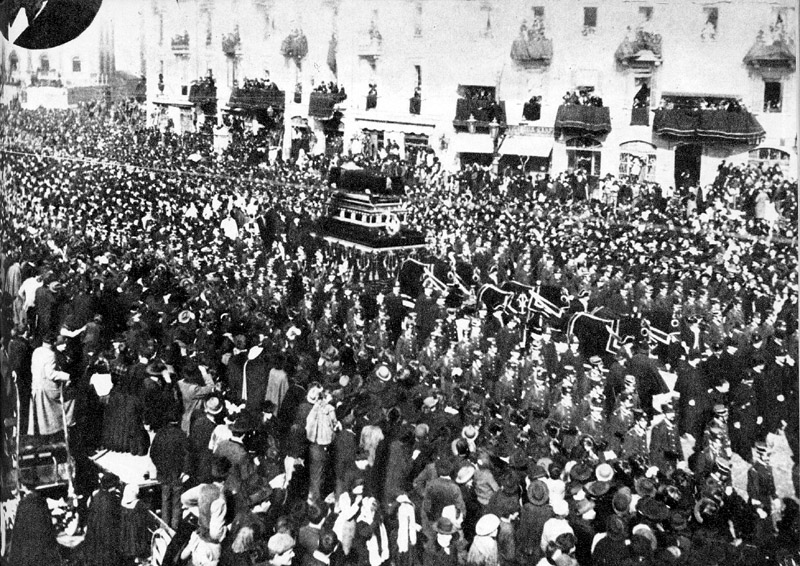 The massive funeral of Giuseppe Verdi. In front of his house, people sang Va pensiero in tribute to their idol

He sang at the Colón, today he is a soloist at the Ljubljana Opera and comments on football in Slovenia
The Incredible Life and Three Deaths of Courtesan Marie Duplessis, the Highest-Paid Mistress in Romantic Paris