Skip to content
Caracas.- In the second and final leg of its tour of Turkey, the Simón Bolívar Symphony Orchestra arrived last Saturday in the city of Ankara to make its debut at the concert hall of the CSO ADA Ankara Music Campus, which was recently inaugurated in October. 2020. A modern work of engineering and architecture by Semra & Özcan Uygur.

The result of more than twenty years of construction and located between Ankara Castle and the mausoleum of Mustafa Kemal Atatürk (first president of the Republic of Istanbul), this place is the new headquarters of one of the oldest groups in the world. , the Istanbul Presidential Symphony Orchestra (founded in 1826).

Dr. Eduardo Méndez, executive director of El Sistema, underlined the importance of this visit for the group.

“We are very pleased as this is a long overdue but postponed visit due to the pandemic, and it comes in the midst of great events that create the need for messages of love and peace, which has always been our postulate: the language of music as the integration of the villages. The music of our young people is like a voice in which the call is made to raise awareness and better understand ourselves as humanity,” he said.

“Today is also a special day for those of us who believe in Christ, it is Palm Sunday,” were the first words of the Venezuelan ambassador to Turkey, José Bracho Reyes, in front of the young people. orchestra musicians.

“The expectations in Ankara have been met and more than met. I would underline the versatility of the orchestra. Starting with Bernstein, continuing with Estévez, Castellanos, Desene and ending with Alma Llanera is something that not only moved Venezuelans, but the whole audience. I told the Deputy Minister of Culture of Turkey that this was the first presentation, but it has only just begun, because there is a desire to insert the El Sistema model into the educational model of the Turkey,” he added.

Ambassadors of a culture for peace

After three presentations and educational activities in Istanbul, Master Andrés David Ascanio, underlined the purpose that drives the institution of which he is also academic director.

“Music is the universal language par excellence, through it we can unite different cultures, we did it two days ago at the school of the Darussafaka Society orphanage, playing with their children the hymn of this institution at Bella Ciao. It is about giving a message, through children and young people, whose background shows us that no matter where we come from, who we are, what are our beliefs, what are our religions, our races, in the end the music unites us, the score unites us. It allows us to think about a better future,” he said. 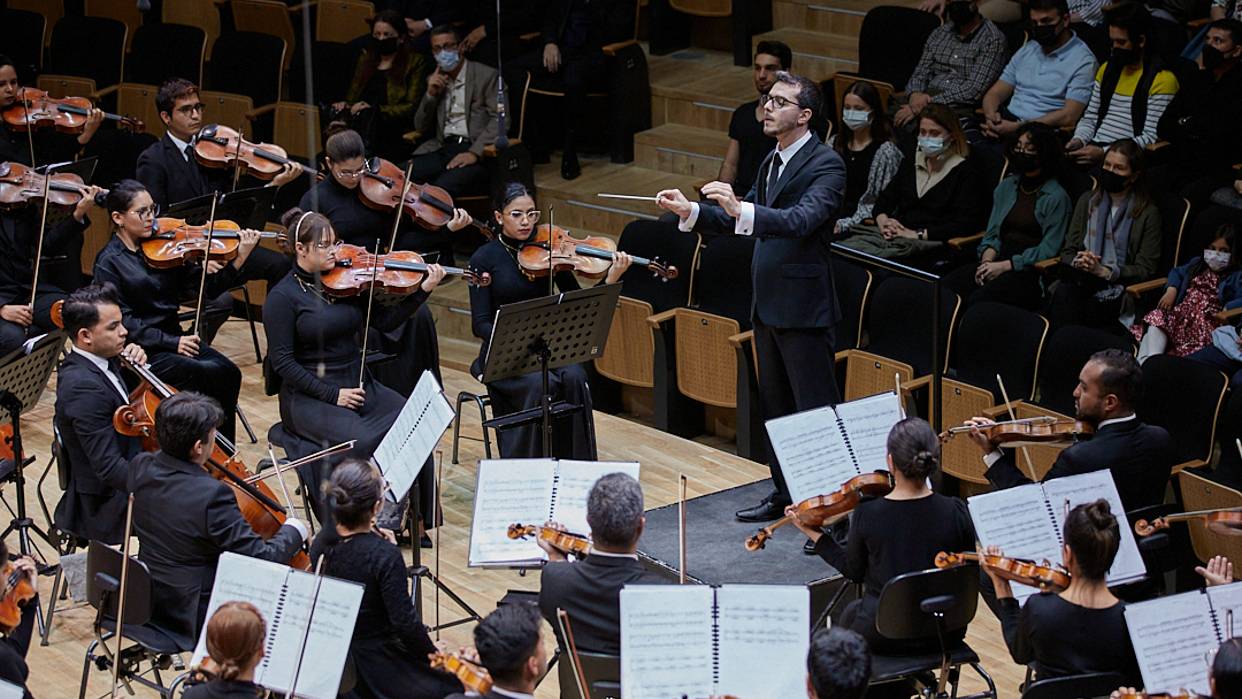 In the footsteps of Giuseppe Donizetti

After two years of foundation (1828), the Presidential Symphony Orchestra of Istanbul, at the request of Sultan Mahmut II, appoints the composer Giuseppe Donizetti as conductor and music teacher of the Ottoman Empire. Almost 200 years later, the state group has gone through various stages, resounding with its strength in the universal history of music.

The avant-garde continues to be characteristic in the 21st century, since the current headquarters, inaugurated in the context of the crisis of confidence due to Covid-19, is composed of bold architectural forms. Two spheres covered in opaque glass, located in the middle of a body of water, connected by a glass triangle, with a monumental and timeless design.

German architect and professor Ralph W. Fasold, in collaboration with the Fraunhofer Institute for Construction Physics, were the consultants for the acoustics of the hall, in which gigantic glass panels stand out to improve the sound.

And the second part, directed by Maestro Christian Vásquez, took up the challenge before the unbeatable nobility of Symphony No. 5 B flat major, Op.100 by Sergei Prokofyev, pleasantly surprising the public who also applauded the encores, Trish- Trash/Triki-Traki, by Paul Desenne; the Mambo, by Leonard Bernstein, and the Alma Llanera, by Pedro Elías Gutiérrez.

Maestro Christian Vásquez, Maestro Andrés David Ascanio and the orchestral component enjoyed welcoming a visibly moved audience on the second Sunday of Ramadan, a month of prayer and reflection for the Muslim community. 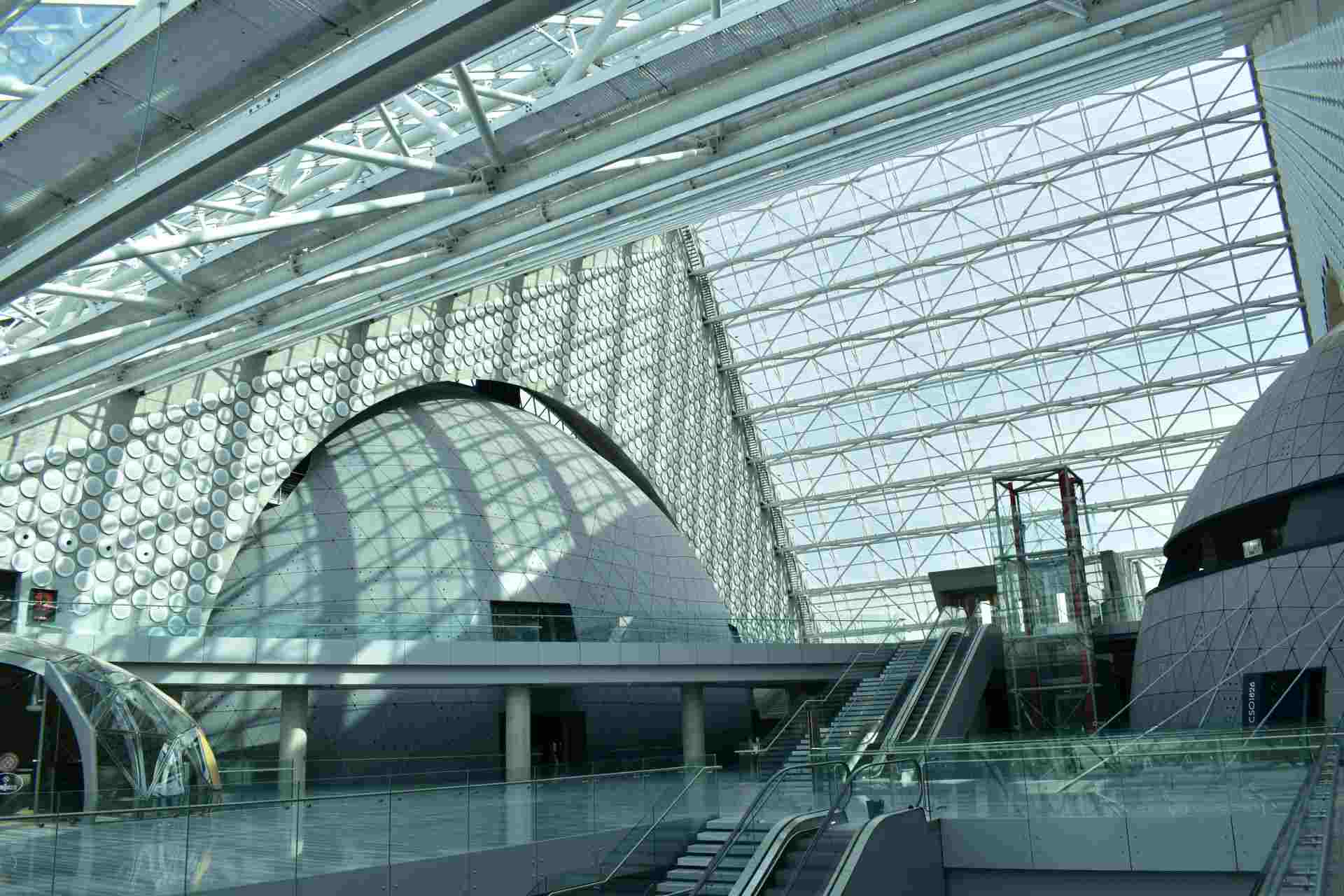