Southern Europe is experiencing one of the worst heat waves in decades. Italy, Greece, Spain and Turkey are battling forest fires.

In Italy, several central and southern regions have lost tens of thousands of hectares of forest. The reason why the country is facing this problem is a combination of political responsibilities, forest protection bureaucracy and also alleged criminal activities.

According to Coldiretti, Italy’s largest farmers’ association, at least 60% of forest fires were arson.

On August 2, two arsonists were arrested in Troina, a rural town in the province of Enna, in central Sicily, where many wind power plants are under construction. This has raised suspicions, as these facilities occupy land intended for agriculture. “We have to pay particular attention to the assumption that the wind industry wants to weaken local farmers, forcing them to do something else,” Fabio Venezia, mayor of Troina, told Italian newspaper La Repubblica, suggesting that the fire would force farmers to sell their land.

To prevent this from happening, a national law was passed in 2000 that prohibits a change of use of burned land for 15 years after the fire. However, it is up to local authorities to apply the law correctly and prevent exceptions from being allowed.

The Sicilian Anti-Mafia Commission, a body created by the Sicilian parliament, is auditing some landowners to clarify whether they have been contacted by intermediaries to offer their land to the wind sector.

“It is necessary to reflect on what is happening,” said Claudio Fava, president of the commission, to the Live Sicilia news site. “There has been a compulsive search for land that could be purchased for €30,000 per hectare, and 200 applications for photovoltaic projects have already been submitted to the regional government.” Prosecutors in Sicily and other regions have opened arson investigations, but as yet The existence of a criminal conspiracy has not been proven.

In Sardinia, experts are alarmed at the amount of biodiversity and olive trees destroyed.

Underfunding and shortage of staff

In addition to the arson scenario, the slow response to the fires was also a major issue. For years, firefighters have complained that they cannot provide adequate services due to underfunding and understaffing.

A 2016 law merged the National Forestry Company with the “Carabinieri” (Italian military police), making firefighters, who typically operate in urban areas, responsible for most firefighting duties. Since fire prevention is managed at the regional level, regional governments must periodically sign cooperation protocols with firefighters, although they do not always have the means to fight fires in rural areas, which are heavily affected by the drought.

Forests in Italy, despite the fires, have increased by around 25% in the last 30 years. Population decline in rural areas is one of the reasons for forestry expansion: “The forestry sector is still, in part, conditioned by a culture that dates back to the 19th century, when the country passed strict legislation for the protection of forest areas. wooded areas and created a special forest police,” explained Davide Pettenella, professor at the Department of Lands, Environment, Agriculture and Forestry at the University of Padua. “In fact, the most powerful forest policy tools continue to be regulatory constraints. A paradigm shift is needed: from ‘prohibit to protect’ and from ‘manage to reassess’,” he said. 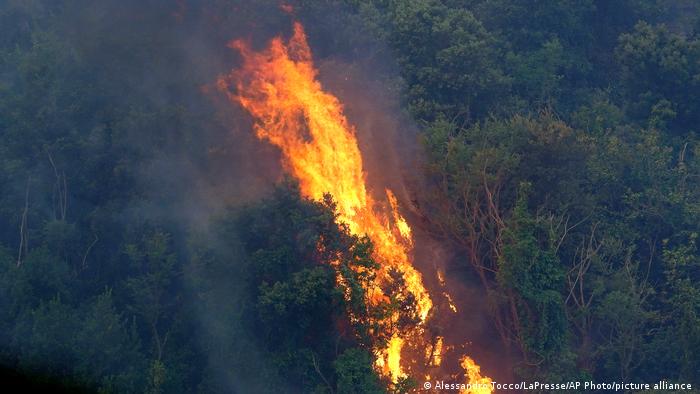 One of many fires in Italy this summer. Heat isn’t the only culprit.

According to environmental associations, Italy should not have missed the opportunity offered by NextGenerationEU to incentivize the protection of forests, the EU plan to support the economic recovery of Member States affected by the COVID-19 pandemic. 19. Italy was the first beneficiary with 235.14 billion euros.

However, the National Plan for Recovery and Resilience (PNRR,) presented by the Italian government to access these funds, “has not allocated a single euro to forests”, said Marco Bussone, president of the National Union municipalities, communities and mountain entities. (UNCEM).

In 2018, the Italian government passed a groundbreaking law on forest management, which Bussone describes as “one of the best in Europe”. However, it did not have the necessary resources which, according to UNCEM, would be at least 100 million euros per year.