Vaccine tourism is a “double-edged sword”, warn analysts at GlobalData. it’s true that it can help restart of tourism in some destinations, but it also raises the question of vaccine equity not only within these countries, but also in relation to each other. This type of tourism The gap between those who have money and those who don’t is widening.within each country but also between countries, at a time when the fully vaccinated population in rich countries exceeds 60% while in poor countries it does not reach 4%.

This is the map of vaccination in the world. country in color Dark green are those with the largest fully vaccinated population, while those that show a lighter color They are the ones who have reached the lowest percentage of the vaccinated population and who have the most difficulty in accessing certain types of vaccines.

To enlarge the size of the map, you can click on the image.

According to data from a global survey launched by GlobalData, 94% of the world’s people are worried to some extent about the impact of COVID-19 on their country and their lives. But it is a fact, at this stage, that the prolonged delay in the arrival of vaccines in many countries and the general scarcity affecting the poorest countries creates an insurmountable gap between rich and poor.

The situation in many countries in Latin America, Africa and Asia encourages people with economic capacities to travel to other places who, rich or not, have decided to administer vaccines to tourists as a of complaint

In this situation, favoring vaccine tourism, some States United States, Russia, Maldives, Indonesia, Serbia, Alaska, United Arab Emirates and even Cuba. At a time when much of the population doesn’t have access to vaccines, offering them as part of a tourist package is how some agencies — and destinations — get revenue, according to GlobalData.

In Russia, for example, three-week packages are offered with a price between 1,500 and 2,500 dollars, excluding the price of the plane, but including the complete schedule of vaccines against Covid-19. “With many countries struggling with vaccine shortages, this brings the issue of equity to the fore,” GlobalData said. Russia has now completely immunized a 26.7% of its populationaccording to Our World in Data.

According to data from Visit Florida, During the second quarter of 2021, nearly 32 million tourists arrived in the state of Florida, which is 16.3% more than in the previous quarter and puts the destination at only 2.2% of the indicators for 2019 , the year before the pandemic, as we said in ¿Vaccine Tourism? Florida very close to pre-pandemic levels. In Florida right now the entire guideline has received a 53% of the populationaccording to Usafacts.

In the United Arab Emirates, luxury packages were organized by Knightsbridge Circle for customers residing or working in Dubai and the Emirates, and by January 25% of club customers had used the service. Indeed, in January, the managers of this niche company with the exclusive travel and lifestyle service, explained that the cost of the vaccine was included in the annual contribution of 25,000 pounds sterling (28,100 €). In the Emirates, at that time, the 77% of the population He received both doses of the vaccine, according to official data.

Cuba has also promoted vaccine tourism. The TeleSUR television channel shared images accompanied by the text: “Beaches, Caribbean, mojitos and vaccines. All in the same place. What do you think of this offer? Would you go to Cuba to get vaccinated? “. Indeed, the country intended to produce 100 million doses of the vaccine against Covid-19, the so-called Soberana02, and planned not only to vaccinate tourists who wanted it, but also to send vaccines to Vietnam, Iran, in Venezuela and India. At that time, the 40.7% of the population Cuba is vaccinated with both doses.

Johanna Bonhill-Smith, analyst at GlobalData, recalls that “the richest people in the poorest countries can access vaccines earlier because they can afford to travel. This puts on the table that countries promoting vaccine tourism could donate excess vaccines they instead vaccinate wealthy tourists.

Already in early April, as the vaccination campaign began in the rich world, the Managing Director of the International Monetary Fund (IMF), Kristalina Georgieva, urged advanced countries to “leave aside export controls” Yes ensure that “surplus vaccines reach poor countries” put the pandemic crisis behind us as soon as possible. If this is not achieved and poor countries do not have access to vaccines, Georgieva said at the time, the world will not control the coronavirus, which will continue to expand and mutate, possibly become immune to current vaccines in one of these mutationsas we explained in The uneven pace of vaccination by countries jeopardizes global immunity.

It was already clear at the time that it was important to fully fund the COVAX tool, for an equitable distribution of vaccines around the world, and “to ensure that surplus vaccines are transferred to poor countries”. In other words, we had already assumed that poor countries would receive “excess” vaccines, those that the rich do not need… when they are clear that they do not have them. need

But equity in the distribution of vaccines worldwide has not been achieved. The Democratic Republic of the Congo has less than 0.1% of the population vaccinatedand in fact, across the entire African continent, the percentage is 3.2%, as seen in the graph. 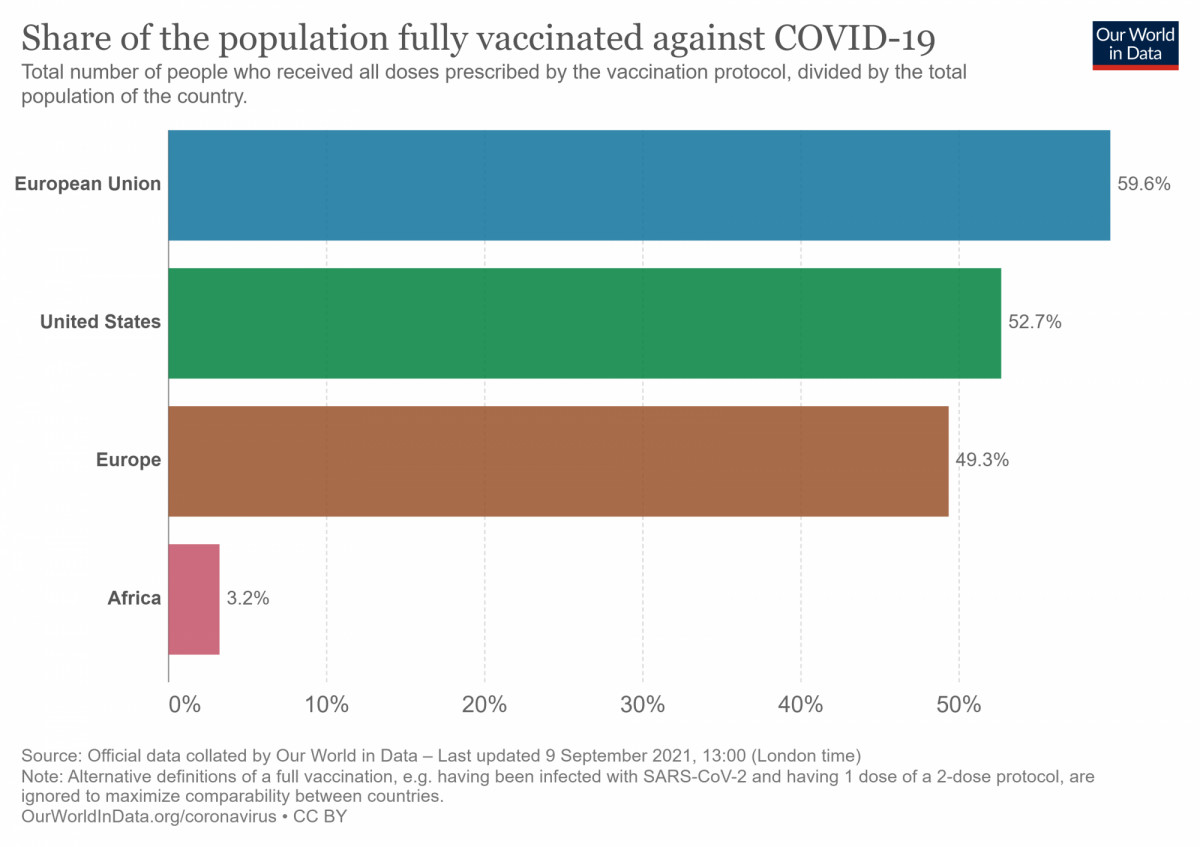