Madrid said goodbye to January with one of its less amiable stamps: the famous anti-pollution “beret” made of gas and suspended particles which in recent years has already led its town hall to apply traffic restrictions . Although due to population, car flow and economic activity it may be more serious there, the problem is by no means exclusive to the capital. Other cities in Spain and the rest of the world are seeing the worrying drop in their air quality from time to time. And that’s a problem. For health. And for the economy.

The data is compelling. According to the WHO, air pollution causes 7 million premature deaths each year and CREA puts the daily cost of pollution caused by fossil fuels at around 8,000 million dollars per day, more or less. 3% of global economic output. Since it is difficult to fight an enemy without knowing it, institutions, NGOs and researchers have long been responsible for monitoring our air. The result is a photograph of the entire planet that, in a nutshell, shows us where it’s best to breathe and where it’s worst.

To facilitate our work in information management, IQAir took care of collecting the values ​​of 6,475 cities in 117 countries and regions and put them on a map. More specifically, its technicians looked at the data for PM2.5, which are very fine aerosol particles, with a diameter of no more than 2.5 microns that concern experts. They are often generated by traffic, industry or construction and are measured in micrograms per cubic meter (µg/m³).

And what does the result show?

A map for air changes

Well, if we look at the last edition, that of 2021, we appreciate the relevant changes without leaving Spain. In our country, IQAir provides the data of the main cities and indicates their average PM2.5, their place in the world ranking and how close they are to the standard recommended by the WHO, which sets the target at 5 μg/ m³, except for the most recommended points on the planet.

With these values, the worst unemployed in the country These are El Grao de Castellón and Murcia, both in Levante. The first marked 15.8 µg/m³ and classified 1,626 of the 6,475 sites analyzed by IQAir; the second obtained 15.1 µg/m³ and ranked 1,735. Interestingly, not far from there are other municipalities with the best range of results, such as Torrevieja, Alicante, Albalat, Algar de Palancia or Benicasim , none exceeding 5 µg/m³ of polluting particles.

In Barcelona, ​​it was recorded 13.2, which places the city in position 2,166; in Zaragoza 11.4; in Malaga 11.6; Seville 10.2; Bilbao 10.1; Vigo 11 and La Coruña 12.5. In all of these cities, IQAir estimates that throughout 2021 the WHO guideline has been exceeded two or three times. In the community of Madrid, the data varies considerably depending on where the measurement is made. In the capital itself, the result was 9.4 µg/m³; but in Coslada they reached 13.1.

In the islands, the results are generally reasonable. In Mallorca (Sa Pobla) they obtained a score of 8.1 and in the Canary Islands the results varied between the 12.6 recorded in Arafo and the 6.7 in Breña. However, at none of these points, the orange level which is reached in Levante points.

Beyond Spain, IQAir’s report shows a clear difference between continents, leaving East, Southeast and South Asia as the worst-off countries. Africa also presents worrying data, although, as the technicians acknowledge, they have only obtained data in 13 of the 54 countries, so the monitoring there is not complete. For this reason, part of the continent is shown in grey. As on the map of Spain, the best results appear in blue (0-5 µg/m³ of PM2.5) and the graduation worsens until reaching purple, with an alarming 50 µg/m³ of PM2, 5. 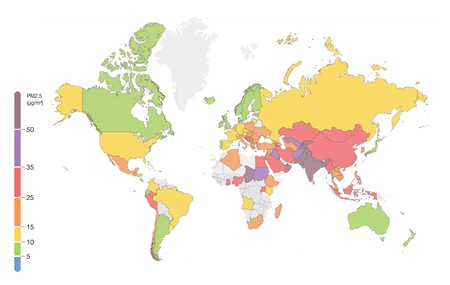 If we analyze the overall ranking of 117 countries, Spain is at the bottom of the table, in 88th place, its average value is slightly better than that of other European neighbors, such as Italy, Switzerland, Greece or Austria; but it does less well than Finland, Estonia, Denmark, Germany or the United Kingdom. Also with our Iberian neighbors. If Spain scores an average of 10.7; in Andorra the figure is 7.3 and in Portugal 7.1. The worst unemployed is Bangladesh and the best New Caledonia. 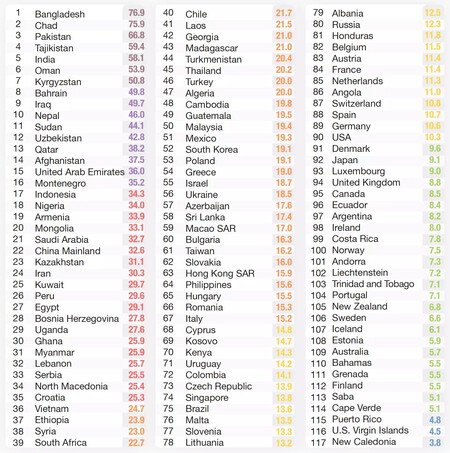 The drawing is more or less similar when the capitals are analyzed. By far the most worrying figure is that of New Delhi, India, with 85 µg/m³ of PM2.5, which puts it in the purple band, the worst of those described by the WHO. Nouméa, in New Caledonia, occupies the opposite pole, with only 3.8. Between the two, near Copenhagen, Luxembourg or London, is Madrid, with 9.4. 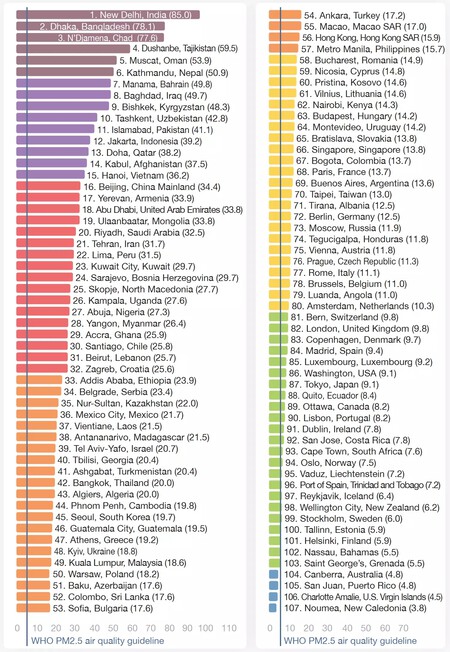 If the European metropolises, in general, are not badly off in the global picture provided by IQAir, its technicians encourage don’t let your guard down. Rising PM2.5 levels have been identified as the most serious environmental health risk in Europe, even though emissions have fallen significantly this century.

Its authors warn of some differences between territories: “The northern and western regions of Europe have higher PM2.5 levels than the south and east due to the burning of coal and biomass for heating in countries that experience long and cold winter months.” 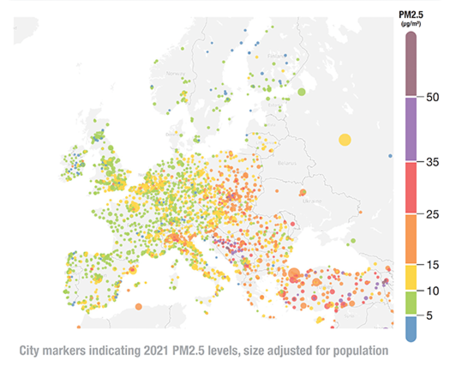