The trip of two friends to the library is at the origin of the birth of the Galician startup Innogando. It was about Elio López, breeder and veterinary student at the time, and Daniel PardoComputer engineer.

The young people had spent everything their childhood together on a farmwere very familiar with this rural reality, and during their walk they complained about the extent of digitization on a daily basis in the farms in which they had grown up.

That thought didn’t let them focus on their grades that day. Rather, his stubbornness to improve with technology an economic activity that required reinvention occupied all their time in the library.

“We weren’t able to study with the technologies in mind that could be useful in building the livestock of the future. We were clear that monitoring animal variables remotely would allow us to improve the quality of life of livestock farmers. “, he told D+I Elio López, CEO and Founder of Innogando.

Without more attractive conditions for breeding, andThe necessary generational change is extremely complicated and the majority of farms already have an urgent need for “new blood” to face with guarantees the multiple challenges facing this primary sector.

A cow with one of the Galician startup’s geolocation devices.

In this context, technology and the digitization of the process become a first-rate tool to build a more favorable future and to mitigate, as far as possible, extreme situations such as those that have occurred in recent weeks at the hands of the the war in Ukraine and escalating energy and fuel prices.

This day at the library was decisive for the future of Innogando. Along with another veterinarian named Óscar -now he is no longer part of the company but he was the key to its start-, Elio and Daniel applied for a university entrepreneurship program which they ended up winning and gave them a ticket to Silicon Valley.

Monitor the animal in real time

“From there, training and acceleration programs allowed us to validate the value proposition, the business model and above all, start building a strong teamsaid Lopez.

The unsatisfied need of the market being well identified and defined, Innogando has concentrated all its efforts on the development of geolocation solutions and detection of relevant events of the animal without the breeder having to physically see the animals, a circumstance which considerably improves their quality of life.

“We created a smart watch for the cows that monitors and geolocates cattle but also recently equines. We primarily target extensive farming, but it is also a high value-added product for intensive farming.”

Innogando is the only company on the market “to offer geolocation as well as real-time activity recognition. We know if the animal ruminates, rests, grazes, rests, eats, plays and the number of steps it gives”, explains the founder. 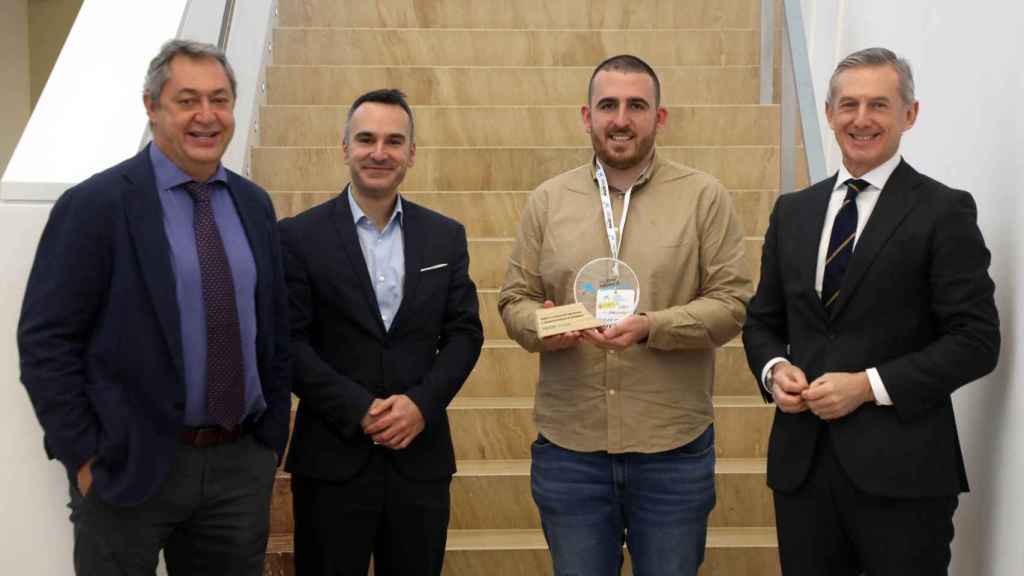 Elio López, CEO and co-founder of Innogando, received the EmprendeXXI Galicia award from the hands of the general manager of Igape, Fernando Guldrís, and the northern territorial manager of CaixaBank, Juan Pedro Badiola.

“We do all of this without having to change batteries and ensure coverage in the most remote areas“, adds the CEO.

It is also self-designed and manufactured. Eliter, a brand of calves based on the traceability of their state of health and the conditions of origin, which makes it possible to revalorize this group of animals.

The Galician startup has sold around a thousand devices in the first week of marketing, has customers throughout the Spanish geography and International expansion has already begun. The objective for 2022 is to reach 5,000 devices in operation.

“Our most notable success is the team we have created, we are 12 people involved in the project capable of taking it to another dimension“, Elio López proudly points out. Innogando’s staff is made up of farmers, veterinarians and computer and electronic engineers.

Innogando won this year the EmprendeXXI awards in Galicia, promoted by CaixaBank and co-awarded by the Ministry of Industry, Trade and Tourism, through ENISA. In Galicia, the organization of the EmprendeXXI Awards is supported by Igape. The prize includes an economic endowment of 6,000 euros, access to specialized international training provided by ESADE and Silicon Valley experts, and the possibility of participating in Investors Day EmprendeXXI, a day where they will stay in contact with investors and companies interested in collaborating with the ecosystem.entrepreneur.